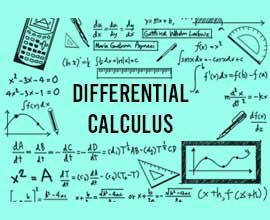 Course Timeline:
The inverse trigonometric functions sin−1(x) , cos−1(x) , and tan−1(x) , are used to find the unknown measure of an angle of a right triangle when two side lengths are known.
Test
Attempt all the sing...
A function f has limit L as x→a if and only if f has a left-hand limit at x=a, has a right-hand limit at x=a, and the left- and right-hand limits are equal. ... A function f is differentiable at x=a whenever f′(a) exists, which means that f has a tangent line at (a,f(a)) and thus f is locally linear at the value x=a.
Solve all the problems:
Test
...
Differentiation allows us to find rates of change. ... If y = some function of x (in other words if y is equal to an expression containing numbers and x's), then the derivative of y (with respect to x) is written dy/dx
Solve all the questions:
Test
Attempt all the ques...
The derivative is defined as something which is based on some other thing. In Mathematics, Derivative is an expression that gives the rate of change of a function with respect to an independent variable.
Try to solve all the questions:
Test
Solve all the questi...

5 food suggestions to control stress and anxiety during exam time

View All News
Your experience on this site will be improved by allowing cookies.